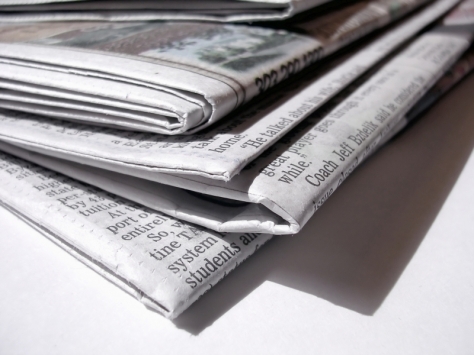 (Notice: this is not a political post. It is inspired by current political issues, which are not the point here. I don’t like arguing politics online, and I don’t care what aisle or wing you’re on.)

A few weeks ago, my local paper made a certain endorsement that proved to be somewhat controversial for some of its readers, given that a good bit of them lean the other way on the political spectrum. A negative response was of course expected, running counter to its readers’ alignments or the country’s projections, but that’s fine because…

I want to clear up a common complaint I’ve gotten over the last couple of weeks. As a retention representative at said paper, one of my jobs is to call recently canceled accounts and get feedback. Obviously in a lot of recent cases, the aforementioned endorsement was the cause of cancellation. However, not all of them stopped because of who was endorsed. For several, it was the fact that we made an endorsement in the first place that lead to them canceling their papers. One man even told me that “the paper shouldn’t endorse candidates, that it should let the people decide.”

It’s not the first time I’ve come across people who thought this about news publications, that the media should stay an un-opinionated observer. Hearing it so often these couple of weeks, I felt compelled to say something about it. And that is this: The news can have opinions. Newspapers have the right to make endorsements. The free press has free speech.

The press is allowed to, and in fact is supposed to, critique and criticize the government. One way to do that is by voicing its well-informed thoughts on current issues to help its audience form their own opinions. That included endorsements for political office. It’s their right to do so under the First Amendment, which guarantees both freedom of speech and press (as well as religion, assembly, and petitioning the government, but those are beside this point).

There are three groups I’ve talked to this week that I’d like to take a moment to address:

For those readers who stopped the paper because you don’t agree with its view, that’s fine, and you’re fine. It’s how the free market works. You don’t like what’s on, change the channel. It’s perfectly reasonable, and I’ve got no issue there. I would like to say that if one opinion is the only reason you want to turn away from an otherwise trusted news source, please reconsider for a moment. One differing opinion, particularly on something so split, shouldn’t be the only deciding factor. But if you’re decided, then good luck to you, and I hope you enjoy whichever news source you switch to.

For those readers who are under the mistaken belief that news organizations aren’t supposed make endorsements, that’s incorrect, but I understand the misunderstanding. The stipulation is that news media distinguish between “news” and “opinion”, and since an endorsement is by definition an opinion, it doesn’t get confused with reporting actual facts too often. In fact, since news media gathers and reports actual facts, they are uniquely qualified to make such informed editorial opinions to help better inform you, the reader, in making yours. Even if your opinions end up being the complete opposite.

For those readers who simply believe that it’s wrong for publications to make endorsements, that they are supposed to stay “neutral” and “unbiased,” that’s just not going to happen until all our news is reported by emotionless and uncaring robots. The press is supposed to inform the public and give their informed opinions. Again, in being the fact reporters, press organizations are probably best suited to give informed (if not always agreeable) opinions. If you don’t agree with their opinion, like I told the readers who left for that reason, that’s fine. There are countless alternatives. But don’t belittle the right of a publication to speak its mind for what it thinks is best for this country. It shows a fundamental misunderstanding of your most basic and most important rights as a US citizen, specifically the right that lets you do the exact same thing.