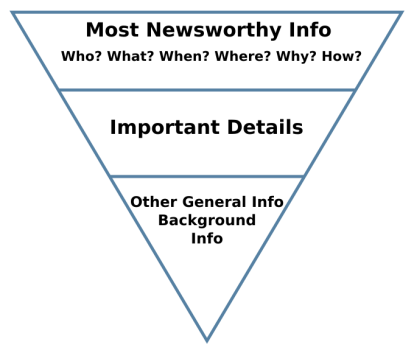 I have a tip for all would-be invited guests of any event. When it comes to writing your short-form biography, use the Inverted Pyramid practice of writing so that your most important and relevant info makes it to the top.

I’ve been prepping a lot of guest bios for this spring’s MTAC (Middle Tennessee Anime Convention) over the past couple of weeks. Some are on the website, and some are currently still pending. Almost in every case though, I have to do some editing, or flat out rewriting. Often, it’s simple stylistic quirks or formatting concerns, but some cases are for cutting away irrelevant portions of a too-long bio to focus on why these guests are important to our attendees.

Here’s the simple mistake: people often write their bios chronologically. People like to open with “From so-and-so, USA, I grew to be such-and-such” and continue in a few paragraphs until modern day. Maybe even open with a witty remark about their favorite band that has nothing to do with why people are reading. That can work if you’re writing a book, but I’m talking about short-form biographies – a couple to a few short paragraphs that explain why you are relevant to whatever topic is at hand and what quick history gives you credibility. For something short and to-the-point, this is why I recommend looking into the inverted pyramid.

The inverted pyramid is a writing metaphor for putting the most important, wide-spread content at the top, and as you go further and further along, your content diminishes in importance and relevance to the reader. The two main reasons for this are:

The inverted pyramid practice is especially prominent in journalism. Think of stories in newspapers where space is always at a premium and a reader’s continued attention is ever elusive. Being a journalism student in my college days, I’ve had it hammered into my head, but I don’t expect everyone to be familiar with it. Hence this article. As such, here’s an example when it comes to writing a short-form biography.

Let’s say you, dear reader, are to be a guest at a convention because of some work you’ve done. Be it acting credits, books, notable events, whatever. You are brought to this event for that one main relevance, whatever it is that gives you credibility. Whatever that thing is, it needs to be in your first paragraph (which is called a “lede”). Otherwise, you can expect some empty chairs in the audience when it’s your turn to speak. If the short blurb about yourself (which is hopefully listed on the event’s website and program guide) doesn’t start with why I should care about you, you’ve already lost my interest as a prospective attendee. You might be really cool, but I’ll never know if you didn’t tell me so from the start.

I’m not saying to be completely dry and matter-of-fact. If you’ve got the writing chops to make what you do sound interesting, then by all means do so. Be careful though. We’re often not as clever as we believe (guilty as charged). A missed joke can derail your reader, especially if it clouds the purpose. Clarity is more important than cleverness.

If you are a “name” – someone who people know who you are and don’t need to sell yourself to your fans – stop thinking like that. There will always be people who don’t know who you are. However, they might recognize titles you’ve worked on or be interested by what you tell them you do. I’ve never met anyone who thought that they’re fine with the number of fans they’ve got, so there’s no reason to keep trying for more.

After saying all of this, I have a disclaimer to make (and if I had to cut for space, this embarrassing part at the bottom would be what goes first): I am horrible at writing my own bio. This isn’t really due to the technical know-how of writing one. I just have no idea how to sell myself, what qualities of myself to put at the top in a general short-form bio. On that topic, I can’t help, except for one recommendation I’m bad at following myself. Tailor your bio for whatever focus it is meant for. Don’t rely on a stock bio for everything you do. If you need it because of your acting credits, don’t open with your expertise on peppers. Knowing your audience is your first step. After that, tell them why they should want to know you.

What writing tip do you want to give the world?

One thought on “Use “Inverted Pyramid” When Writing Your Short Bio”